Aeotec LED Strip has been crafted to power connected lighting using Z-Wave Plus. It is powered by Aeotec’s Gen5 technology.

To see whether LED Strip is known to be compatible with your Z-Wave system or not, please reference our Z-Wave gateway comparison listing. The technical specifications of LED Strip can be viewed at that link.

Familiarize yourself with your LED Strip. 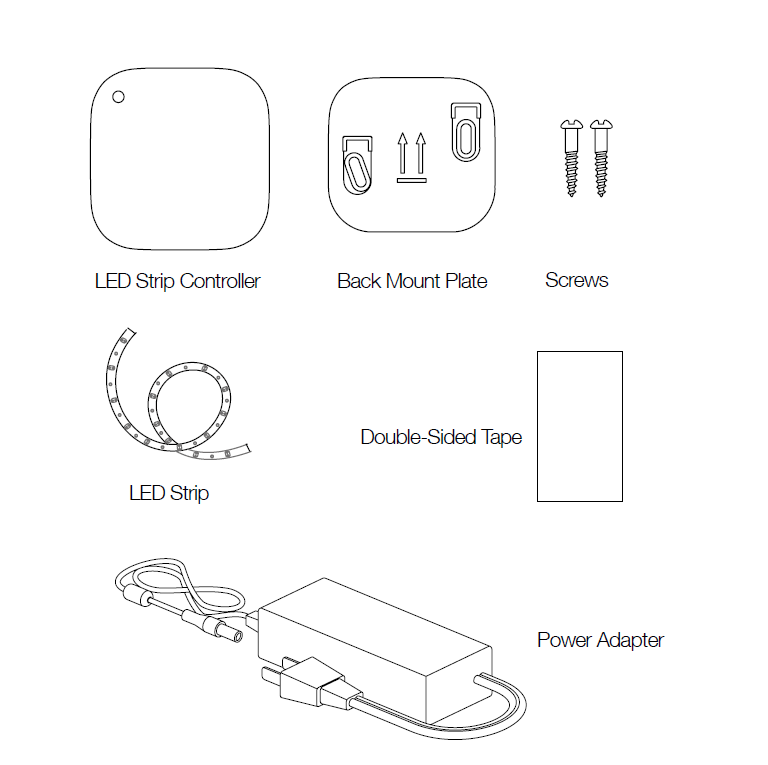 These will be needed to cut your LED Strip to fit the area that you want.

Step 1 - Before you begin, test your LED Strip.

Step 2 - Measure your surface and cut to size.

Step 3 - Stick the LED Strip on a surface.

2. Connect the Power Adapter to your LED Strip.

3. Plug the Adapter into an electrical outlet and then the Network LED on LED Strip Controller will blink slowly to indicate it is ready to be paired to your Z-Wave network.

4. Now press the Action Button to toggle your LED strip on or off to ensure the connections between your LED Strip and its Controller properly connected.

Please read this and other device guides carefully. Failure to follow the recommendations set forth by Aeotec Limited may be dangerous or cause a violation of the law. The manufacturer, importer, distributor, and/or reseller will not be held responsible for any loss or damage resulting from not following any instructions in this guide or in other materials.

The LED Strip Controller and Power adaptor elements of this device are both intended solely for indoor use in dry locations only. Do not use in damp, moist, and / or wet locations.

Adding your LED Strip to a Z-Wave network (insecure pair).

2. Press the Action Button once on the LED Strip (The network LED will blink green as an indication it is pairing insecurely, please refer to section "Enabling Security Encryption" in the Advanced Function section to pair it securely).

3. If the LED Strip has been successfully added to your Z-Wave network, its Network LED will become solid. If the pairing was unsuccessful, the red LED will be on for 2 seconds and then remain a colorful gradient, repeat the instructions above from step 1.

With your LED Strip now working as a part of your smart home, you’ll be able to configure it to indicate different colors from your home control software via setting the RGB value. Please refer to the user manual for your Z-Wave controller/gateway for precise instructions on configuring your LED Strip to your needs.

Removing your LED Strip from a Z-Wave network.

2. Press the Action Button on the LED Strip.

3. If the LED Strip has been successfully removed from your  Z-Wave network, its Network LED will remain colorful gradient. If the removal was unsuccessful, the Network LED will still be solid, repeat the instructions above from step 1.

Parameter 37 [4 byte] will cycle the color displayed by LED  Strip into different modes:

The following values correspond to 2 different transition styles between colors:

The Cycle Count is used to define the number of repetitions / cycles displayed by your LED Strip in Color Display Cycle before stopping:

The Brightness is used to define the brightness of animation displayed by the LED Strip.

This function would be used when the Color Transition Style is  set to Fade Out/In.

This function would be used when the Color Transition Style is set to Fade Out/In.

The table above shows a decimal representation of the settings that can be set on parameter 37.
Parameter 39 - Multi Color, Single Color, or Random Mode.

Parameter 39 [4 byte] can be used to set up to 8 colors to cycle between when LED Strip is in Multi Color Mode. Colors transition from Color Index 1-8.

and then Orange to Yellow circularly (Red-Orange-Yellow).

When your Strip is in Single Color Mode and the Fade Out  Fade In transition style, the parameter 39 would be used to set the RGB value.

When your Bulb is in Random Mode, the parameter 39 would be used to set the random seed, then your bulb will automatically generate random colors to be displayed according to the random seed you set.

In order to take full advantage of all functionality the LED Strip, you may want your LED Strip as a secure device that uses secure/encrypted message to communicate in your Z-Wave network. In order to do so, a security enabled controller/gateway is required.

3. If LED Strip has been successfully added to your Z-Wave network, its Network LED will be solid when you turn LED Strip on.

You can determine the health of your LED Strip 6s connectivity to your gateway using a manual button press, hold, and release function which is indicated by the LED color.

2. Wait until the RGB LED turns into a Purple Color

The RGB LED will blink its Purple color while sending ping messages to your gateway, when it has finished, it will blink 1 of 3 colors:

Be sure to watch for the blink, as it will only blink once very quickly.

This method is not fully advised unless your gateway has failed, and you do not yet have another gateway to perform a general unpair on Multisensor 6.

2. Wait until the RGB LED turns into a Green Color, and then release.